Every noteworthy era has to meet its end, and after schooling a newbie on metaverse sextiquette, I decided I’d had my fill of the Tutorial Land That LL Forgot. After poofing through the portal, I landed at Social Island, and a quick peek at the world map revealed that there are six Learning Islands and three Social Islands total, which new members are presumably rezzed on at random when they sign in for the first time. Oddly, Learning Island D looks nothing at all like Learning Islands 1 – 5 (at least from the overhead view on the map), so I’m wondering if there are special circumstances that result in someone rolling the D experience. But as suspected, I could no longer access the Learning Island sims, while all three Social Islands are ripe for the teleporting.

Ahhh, Social Island(s) – an oxymoronic name if there ever was one. Let me put it this way: I immediately encountered a gentleman whose profile mentioned his love of perving and fapping, and while his forthright honesty was commendable, I wasn’t particularly keen on being molested. I happened to land at Island #1, and after camming around a bit, I checked the other two and found them to be identical in build and in visitors. Which is to say, an even mix of 0 day newbies standing around seemingly confused and lost, and primarily silent veteran residents, many of whom had completely blank profiles despite hundreds, if not thousands, of days in their respective account ages. It reminded me of a shopping mall I worked at as a teenager, where all of the smaller boutique shops had closed and only the larger department stores remained. The facades were there, sometimes even the lights were even on, but no one was home.

Out of curiosity, I ticked the box to allow Voice, as I wasn’t sure if spoken word chatting was more common in these areas. Social Island 2 and 3 both have voice chat turned off at the main hub, but Social Island 1 allows it, and even the two or three people whom my radar indicated were voice-enabled were keeping quiet. However, I did run into one newbie who spoke to me in an distinctly young-sounding voice, which prompted me to quickly teleport away. I know that children do sign up for Second Life against the TOS, but hearing one speak was nonetheless alarming. I’m not even sure if you can send in an Abuse Report for that kind of thing, since voice doesn’t have the same ability to be captured as proof of abuse in the same way that local chat or instant messages would. Regardless, I’d had my fill of Voice for the night. Which means – drumroll, please – it was time for Operation Ever-Lution: The Marketplace Edition! 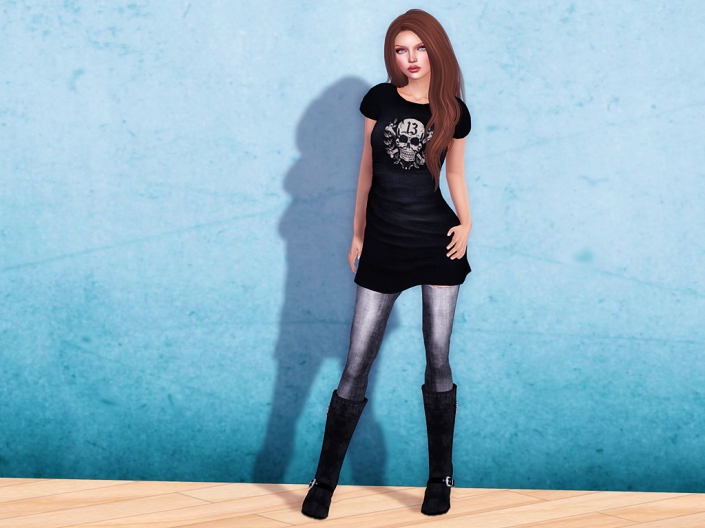 Pretty cute, hey? I probably could have gotten away without spending those Lindens, but I have both the Larry Jeans dollarbie pack (comes with 3 pairs of jeans) and the MYLU boots on my main account, and I’ve gotten lots of use out of them. Speaking of footwear though, one thing is becoming troubling clear: it’s going to be problematic finding shoes for system feet, particularly ones that aren’t boots or sneakers. Thankfully I have a penchant for both, so I won’t necessarily mind wandering around the grid in a summer dress and close-toed stompers. But Slink mesh feet are becoming so ubiquitous, it’s genuinely difficult to find footwear options (mesh in particular) that don’t require them. Here’s hoping that the system avies in the upcoming Project: Sansar platform aren’t saddled with the same clubbed tootsies that SL ones are!

So I’ve officially “arrived” in Second Life! While I’ve made stops in newbie-friendly spots like Caledon Oxbridge (where I enjoyed a quick chat with Miss Lindal Kidd), New Citizens Incorporated and The Shelter, it was primarily to snag landmarks for my “helpful tips” notecard, so my visits were brief. But with the weekend finally here, and my inventory stocked with a modest cache of freebies, I feel like I’m ready to become a true resident of the grid at long last. Excelsior!

Follow Happily, Ever Afterr in Second Life on WordPress.com
Join 1,319 other followers