“Take a moment to unwind yourself, my sweet
Feel the softness of my breath creeping into your dreams
Well you came, and you saw what I saw, and you fell
I fell, and you know that we are tasting heaven
But it’s hard, and it’s good
And I love the fire you stir in me
My delicate dream …”

Carl Sagan, that most wonderful and wise multi-hyphenate (astronomer, cosmologist, astrophysicist, author, and more) said something so thought-provoking and profound that the first time I heard it, it made the breath catch in my throat and my heart shiver:

“The surface of the Earth is the shore of the cosmic ocean. On this shore, we’ve learned most of what we know. Recently, we’ve waded a little way out, maybe ankle-deep, and the water seems inviting. Some part of our being knows this is where we came from. We long to return, and we can because the cosmos is also within us. We’re made of star stuff. We are a way for the cosmos to know itself.”

I’ve remained captivated by those words because they speak so poetically and beautifully to the greater knowing that I believe is shared amongst virtually all religions; it makes itself a touchstone along spiritual journeys, and is even supported by those more rational and scientific minds, who state that energy can neither be created or destroyed, it only changes form.

Many cultures and theologies have an appreciation for this energy, this star stuff. In the Western world, we have some familiarity with the concepts of Chi (Chinese) or Ki (from Japan). But we seem to be fearful or cautious about the unseen having an effect upon our lives. That’s why meditation can be so beautiful and beneficial: the quieting of one’s mind, not to make something happen, but just to relax, to breathe, to behold and be held.

So many of us live our lives caught within a perpetual storm: thundering thoughts, sundering hope from our hearts, being in the world but forgetting that the far greater part of us is of the world too. We can be the calm in the eye of the storm; we can point our boats at the lighthouse and the shoreline and let go of the oars. We are energy, ever changing form; as vast as the ocean, and with brighter lights inside of us than the most luminous star stuff.

And in those brief, beautiful, soul-fulfilling moments when this knowing gently, graciously reminds us of who we really are … everything is perfectly aligned.

There’s a beautiful collaboration threading its way through Flickr at the moment, created and curated by my always thoughtful and tremendously artistic friend GoodCross, on behalf of the White Canvas Gallery. It’s called the I Stand For Peace Challenge, and its aim is to “disown the mindless violence around us, and do something about it as artists”.

I have to be vulnerable for a moment and confess in honesty that when I first learned of this wonderful challenge, my heart just wasn’t in the right place to participate. I don’t mean from an ideological standpoint; I think the world of GC’s intentions, and I’m a passionate advocate for peace, equality, and freedom in all its myriad forms. But rather, in the days since my last post, SLife has been a riotous roller coaster of marvelous highs and melancholy lows. Everything from spontaneously spiriting around the course at Relay For Life whilst performing a choreographed pom-pom dance with two of my dear friends, tears of joyful laughter blurring my vision as we lag-looped our way through the connected regions … to finding myself once more in tears of a far more somber sort, deeply akin to those I wrote about several days ago.

But clouds, as they gracefully do, started to gently lift, and a bright parhelion began shining in my direction. Several of them, actually, in the form of nominations to participate in this challenge. And I realized that I was being indulgent and selfish in my sadness, and that’s so uncharacteristic of the beautifully collaborative nature of SL. One of Linden Lab’s original slogans was “Your World, Your Imagination”, and that always resonated so deeply with me, because the “your” in this case can be both singular and collective, and often times our community comes together in incredibly thoughtful, poignant ways. From supporting a virtual world designer who’s facing a health crisis, to fundraising for a tragedy like the Pulse Nightclub shooting, SL residents have always had a profound desire to support and inspire, to pay it forward and pledge solidarity for a worthwhile cause.

And because the universe works in brilliantly thoughtful ways, when I was contemplating what kind of picture to take, this song came on my SL playlist and its symbolism aligned perfectly with my thoughts in more ways than one. When it comes to peace, whether inward or as a greater hope, I always return to one of my touchstones, Joseph Campbell’s teaching: “follow your bliss”. I truly believe that if we all followed this simple but tremendously profound philosophy, peace would prosper because genuine bliss never creates divisions, strife, feelings of lack, or unworthiness. If we could all just express heartfelt love, appreciation, gratitude, and respect for each-other, we would do just as GoodCross yearns and all be united in every world and reality.

It’s a beautiful hope to hold onto; hope is so essential and a truly enlightened state of grace. So until that hope becomes a reality, I stand for peace. And it’s my dearest wish that you will too. ♡

When I was 12 years old, I had an existential crisis. Distressing events kept hitting me like tidal waves: my beloved grandmother died; my mom went deeply into the throes of her depression; my dad was never around; I went through puberty and was dropped by the small talent agency I’d been with since I was 9 (“frankly, if she’d only been dieting as we repeatedly advised … tsk tsk”); migraines plagued me and I suddenly needed glasses, further cementing my “unpopular geek” status. But of everything, the tipping point came when two of my friends – really, two of my only friends – were each having parties on the same day, and I couldn’t figure out which one to attend.

My favorite teacher at the time was a loud, passionate, intense Italian gentleman from NYC in his sixties, who had a jolly “Santa Claus on vacation” look with his bright white mustache and merry, laughing eyes. He took a shine to me and nicknamed me Stella, saying that my red hair reminded him of his granddaughter. Often times I’d peek into his classroom when he had a free period, and he’d lean back and his chair and say “Stella! What’s happenin’?” Usually I’d just wave and smile, with a hearty “Hi, Mr. G!” But the day of the Double Party Conundrum, I broke down in tears.

I sobbed out the whole story – everything that had been going wrong that year – as I sat at a desk and Mr. G leaned on his, saying nothing but passing me tissues, his bushy white eyebrows furrowed intently. To his immense credit, there was none of the typical teasing or cajoling in his demeanor; he took my distress as seriously as I did, and when my voice finally trailed off into silence punctuated by hiccup-breaths, he cleared his throat and said: “Stella baby, you can’t bring back your grandmama, you can’t fix your parents, and you can’t be in two places at once.” (He graciously refrained from commenting upon the puberty quandary.) “But put yuh’self first? That you can do. Make you happy, everyone who loves you will be happy for you. They don’t like it, fuggedaboutem!” He made a sudden, sweeping gesture with his giant paw, like he was back-handing a line of imaginary people across the face. “Vaffanculo!” (A sensational Italian word that I learned, much later, means “fuck off”. Something about the fact that he used this in my defense just makes the memory even more charming to me.)

In the end, I turned down both of my friends’ invitations and stayed home that Saturday reading, which made me happy and angered them both, teaching me that while the logic was sound, sometimes even people who love you may take it personally when they feel that they’re being slighted. And this is something I experienced in both SL and RL very recently, which distressed me greatly and found me once more tearing up at a desk, face buried in tissues, trying to divine a way to let myself be happy while also never allowing those whom I care about to get lost in the shuffle. And I’m blessed to have wonderful people in my life who understand and appreciate this people-pleasing nature of mine. “You have a big, soft heart,” they say, though it feels pretty ordinary to me. I just need to remind myself, gently but intently, that self-fulfillment is paramount. Sometimes “no” is the kindest thing you can say to someone, or in response to a request, for the benefit of your own well-being. Still, for those whom I’ve inadvertently hurt by not being as available, or by putting my attention elsewhere for an overlong period of time, I am genuinely sorry, and I appreciate your patience tremendously. One day time will be on my side again; I have faith that I’m moving in that direction. But until then, when you have my love, that’s something you can always trust. ♡

✈ Sights: It All Starts With a Smile
🎧 Sounds: Emily King – Ordinary Heart

Book of the Month

The always lush and inspiring Elysion played host to my chic look today, although I have to confess that this little library was the third picture-capturing location I tried within the region, as there were some rather … ardent couples who decided to take up residence nearby when I was photographing. Not that there’s anything wrong with that! No, the sensual energy was distracting in the most appealing way. But I do get flustered easily, so I found a quiet perch in a lovely loft and set about getting my picture done.

One of the things I’ve really come to love about regions with rez-enabled is that I’m able to use pose balls for exact positioning, and the Lyrium Beach Pose Collection not only comes with a super handy HUD, but the pose balls are also included for maximum versatility, which is brilliant and so thoughtful. Some wonderful finds from the current rounds of Kustom9, Shiny Shabby, and Cosmopolitan completed the look. Have you visited all the June events that are wrapping up by month’s end? I’m so far behind! But it’s been a beautiful month, and I can’t wait to greet July with arms open wide. I hope June has been wonderful for you too! ♡ 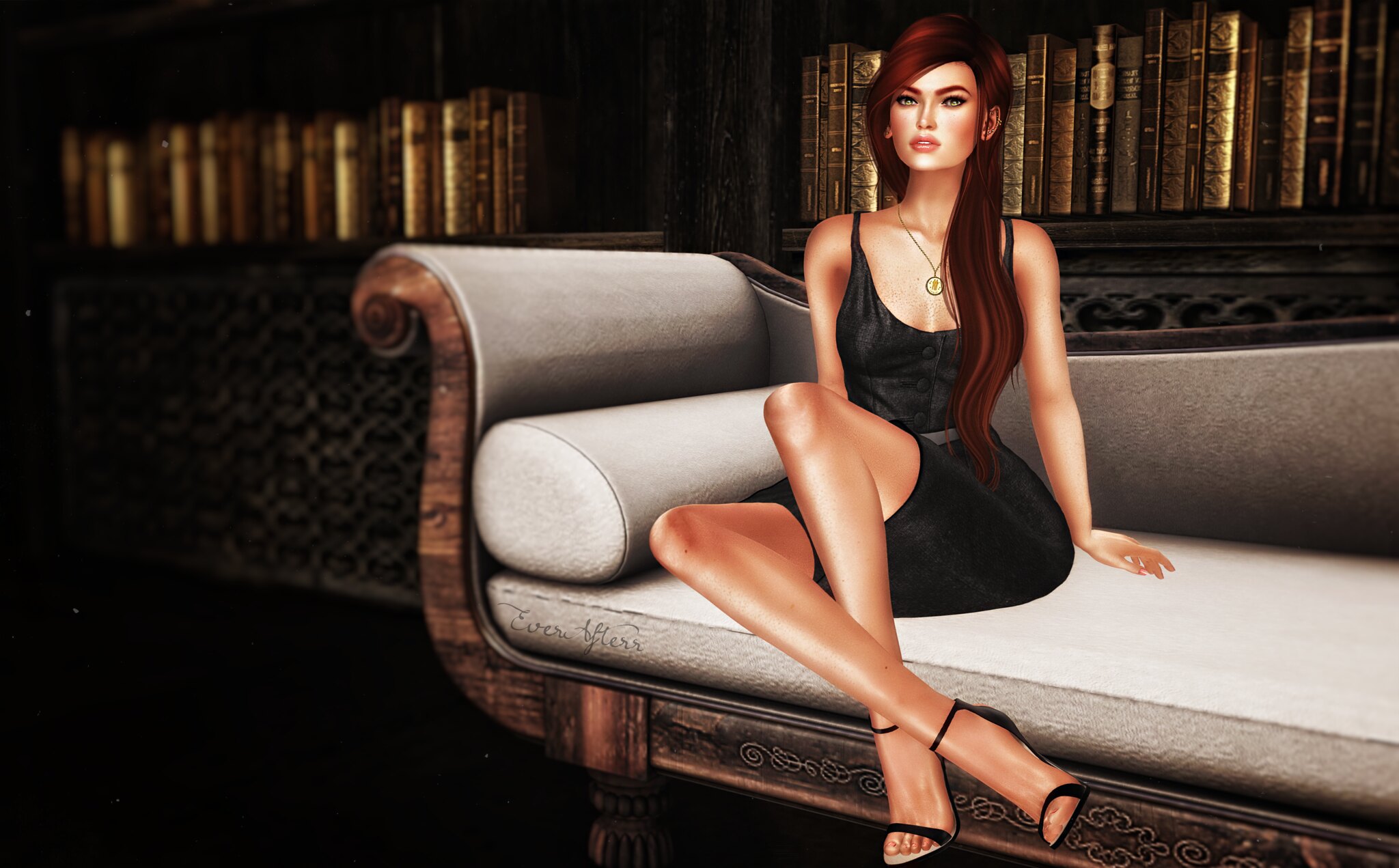 “feel the stroke of your paintbrush,
my blank sheet of paper
I’m your book of the month,
read the fine print later …”