The Weekly Peek: May 18th Edition

Welcome to a new week, everyone! This is a long round-up, so I’mma get right to it. One thing first though: I’m massively enjoying the fun and engaging conversations that have been sparked on Twitter in the last week or two, and I’d love for you to join in! If you have an account, please feel free to add me @EverAfterrSL and I’ll be more than happy to follow back. 💗

🔹 By far and away, the most notable buzz around the Second Life blogsphere this week was concerning a post that appeared on New World Notes regarding the recent article about SL in Atlas Obscura, which was thoughtfully reported by Eric Grundhauser and guided by the singular Ziki Questi. While most residents who shared their commentary on the Atlas Obscura article were enthused by its positivity and appreciative that it focused on the artistry and exploration of Second Life, NWN administrator Wagner James Au had a different perception of the piece:

The post spurred lively comments and conversations about how Second Life is perceived in the media and by non-members, as well as the troublingly inaccurate tendency for some people to mistakenly believe that Adult regions as play host solely to highly sexualized content. The latter misconception was deftly dismantled by these fine writers:

Fair warning: you will be disappointed if you are indeed looking for “perverted monkey sex”. Dang clickbait, it gets me every time! ;)

Other residents took umbrage with Au’s persistence that SL reporting is flawed if it does not thoroughly examine all sides of the grid, including what he perceives to be a prevalence of “pornographic” content. As a result, Au was invited to engage in a conversation on the subject on the excellent Drax Files Radio Hour with Jo Yardley, and he later wrote a follow-up piece reiterating his stance.

Second Life bloggers offered their own perspectives of Au’s seeming dismissal of the Atlas Obscura piece, ranging from bemused to frustrated. While the posts themselves (the ones I’m personally aware of) were respectfully critical and analytical, Becky noted that some of the discussions on social media and in comments were devolving into ad hominem attacks and asked that people rally together to focus on engaging in debate and discourse. All of these posts make for very interesting and thought-provoking reads: 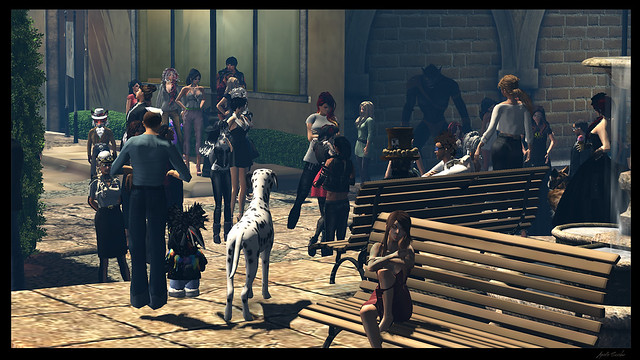 🔹 The Linden Lab in-world meeting was held at the Basilique sim, home of prolific writer and SL Blogger Support maven, Canary Beck. On Twitter and in blogs, several residents wrote about the “surreal” experience of attending the meet-up, where the population swelled to over 100 visitors (massive attendance for an SL event) and Local Chat flew by so fast, it was impossible to keep up. It sounds like many enjoyed the experience, though there’s room for improvement to the format for future get-togethers. Here are some of the attendees’ fascinating first-hand accounts: Canary Beck, Inara Pey, Huckleberry Hax.

🔹 The iconic SS Galaxy, a full featured cruise ship in Second Life known as being one of the virtual world’s most iconic landmarks, recently retired from the grid … or so we thought! As reported by Daniel Voyager and Inara Pey, the former managing director of the SS Galaxy, DBDigital Epsilon, published a blog post detailing that the ship was acquired by Linden Labs and would be accessible to the public once more in more of a “museum” or monument capacity. It’s lovely to hear that the Labs stepped in and saved the ship from retirement, although its preview crews and residents will not be involved with the retooled launch. Will be interesting to see what the future holds for the Galaxy!

🔹 Kat Feldragonne raised some interesting questions at her blog about Second Life networking – particularly the nuances of using various social media sites to foster connections with other SL residents. I’m personally really enjoying chatting with SL members on Twitter, as well as at the excellent Second Life subreddit and the SLUniverse Forums. But if anyone would like to share their personal tips, recommendations, and observations on the vast world of social networks out there, we’d both be grateful to learn more!

This entry was posted in The Weekly Peek and tagged second life, SL.

10 thoughts on “The Weekly Peek: May 18th Edition”

I’m not on Reddit or the forums. I’ve debated whether to join the forums – is it worth it? I don’t think I’m up for Reddit – I’m having enough trouble managing Twitter and Google!! This Google webmaster stuff is about to fry my brain!

Hey Kat! I *really* enjoy Reddit; interesting topics are sparked there, and it’s a small-ish community so everyone seems to be quite friendly and helpful. It’s also a great place to share your new blog posts, but they do warn that you need to engage with the community (good rule of thumb is 9 other shares, comments, etc for every 1 blog post you link to) to ensure that your account stays in good standing.

Where forums are concerned, there are the official SL Forums which I keep track of via RSS (I swear, anything I can possibly stick in Feedly, I have – or at least tried to!) They attract a lot of newbies, and there are some people who are quite impatient and snappy, but they can lead to some interesting reads. I engage a lot more over at SLUniverse, where their off-topic forums are generally more active. But SLU has also led to some of the best suggestion threads I’ve found re: places to explore in SL. The vast majority of members there seem to be long-time residents, so they have a great history of experiences and memories on the grid.

But you’re right, keeping up with multiple social networks is challenging and time-consuming. I *wish* there was a consolidated place or desktop app where you could track multiple accounts easily. I’ve heard good things about HootSuite, but you can only add a maximum of 3 social networks without paying for the service. Might be worth a look though!

I’ve looked at HootSuite as well, but the 3 networks are Twitter, FB, and LinkedIn, as I recall, so 1 out of 3 isn’t worth it for me. :( I, too, have added everything I can to Feedly, lol, including the forums.
I’ll have to reconsider SLUniverse – I’m always looking for places to explore. :)

Oh no kidding? I thought they allowed you to add three of your choice, and it looked like they supported quite a few different ones. Will have to investigate further; also found some alternatives that might be worthwhile. I feel a comprehensive blog post on the subject incoming! :)

I hope you keep doing these, they act as good summaries.

[…] Drax Files Radio Hour, by Jo Yardley – What You See Is What You Get, by Lindal Kidd – The Weekly Peek: May 18th Edition, by EverAfterr […]

I know some of the people of whom you speak here- lots of talent in SL I have found since my return.

[…] reading all about the surreal experience of the LL gathering at Basilique, I really wanted to attend the next one, but y’know, life and stuff. /me sighs. I’ve […]

Follow Happily, Ever Afterr in Second Life on WordPress.com